I’m living in Phoenix and yes…it’s very strange seeing that in black and white. My first touch of it, besides driving through it with my mother at the age of seven and a highway Stuckey’s, was Mesa Grill, celebrity chef Bobby Flay’s first restaurant on Manhattan’s lower 5th Avenue.  Housed in a large store-front with soaring 40 foot ceilings, it was the place to dine in the early nineties. Everything had a touch of chili, lime, avocado, cilantro and …crema! The room was festive with bright reds, muted browns and rusts, touches of oranges and greens with splashes of yellow, evocative of the Sonoran desert in bloom. I remember eating a nachos variation of six or seven massive house-made tortilla chips, beautifully plated. The appetizer which we had with some cactus fruit margaritas had a drizzle of black bean sauce in one direction, an avocado crema going in the other, and a melted cheese swirled somewhere. In the center of that action was a roasted chopped chicken and pico de gallo which diners dipped into. It was a living large experience and very much of the moment. Big hair, bold jewelry, bright colors with larger than life personalities. Much of the urban world, was undergoing the AIDS crisis and New York City was very hard hit.  We needed color. We needed it in our clothes (Stephen Sprouse), in our art (Keith Haring) and on our plates. We needed bold statements to say that we were alive and weren’t going anywhere. Or that we were dying and celebrating life as much as we could.

I was in my twenties, working in an art gallery and waiting tables…and Mesa Grill was truly a culinary torch. The restaurant itself was loud and cavernous.  Clanking and clinking of glasses and silverware were louder than the conversations. Hand-blown pendants lights hung from loft-ceilings. Dusky yellow walls, and pillars painted red. The banquettes were printed with lively cowboys on horses. It was a scene of the right out of the southwest minus the cowboys. (They could be found down in the Meatpacking district or the West Village.)

Now that I’m living in the Arizona, I’m starting to really look at southwestern recipes in a new light as something to explore.  The food originated in Arizona, New Mexico, western regions of Texas and southern Nevada and Colorado is a marriage of foods and cultures from Native American (Hopi and Zuni), Mexican, Spanish settlers and European Anglo Saxons settling in the Wild West. Caucasians addition to the food was mostly with the use of dairy, specifically, butter and cheese.  The Spanish showcased how to raise cattle. The Mexicans brought in the use of vegetables and the Native Americans had corn. These confluences, essentially created another distinct cuisine which are as American as fried chicken and barbeque or jambalaya and clam chowder.  Consumers – of both of Southwestern recipes and in the area — will find lots of peppers, black beans and corn including red, blue and yellow. I think it’s about to make a comeback. 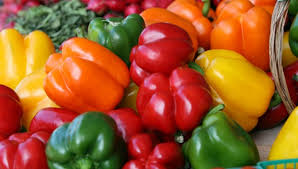 2 – 4 Poblano/pasilla peppers, cut into strip of about a ¼ inch in length (Alternatively you could use sweet bell peppers including green, red or yellow)

Roughly a tablespoon of vegetable oil

1 half of a large onion

Cut the onion into half-moon using a sharp knife or mandolin. Sauteé the onions in a in a large enough pan to hold all the ingredients. Get the onions soft but not browned. Add the peppers, cream and garlic. Cook at a low temperature, stirring the proverbial pot until everything is softened and Cream is reduced by about a quarter. You can toss in some fresh cilantro or parsley for color.

Serve with tortillas as tacos or as an accompaniment on top of fish or poultry.