This is the second of the ongoing series on Food Musings written by award-winning poet and writer Julie Fisher. She is also the founder of Litmore, Baltimore’s Center for the Literary Arts. 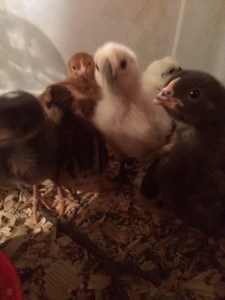 So! Hateful Acres has chickens! Fifteen at the moment. Six who are in the weird feathered but still slightly fluffy, huge feet, awkward stage and nine fluff balls with emerging feathers. I am SO excited. I have wanted chickens of my own for AGES. Our wonderful outdoor space coupled with shared labor and generosity is making it possible.

Chickens are a fun mix of endearing and industrious. I’m repeatedly surprised how long I can just watch them and listen to their little conversations. Even my mostly city slicker kids are enchanted by the chicks and their antics. It’s not that chickens do anything particularly dramatic, they are simply a little silly in their seriousness.

Before I go any further, a disclaimer: I make sweeping generalizations and OVER simplify complex politics and science. I do this hesitantly, but with the goal of opening conversations and encouraging us to investigate for ourselves. End of disclaimer.

Chickens are currently an excellent symbol for the controversy over where our food should come from. In the United States, the science, technology, and expectations of our food culture changed dramatically post World War II. Advertising from food manufacturers waxed poetic and seduced us with promises that new convenience foods would grant us more leaisure time. After war time years of rationing and Victory gardens and let’s face it, quite a bit of labor, we were ready for some convenience.

But behind the scenes and with little media coverage, relationships were forged between chemical manufacturers who had a surplus of stock post war, agricultural colleges, and food regulating branches of the federal government. Strategies were put in place for a long term process to move wealth from the large number of traditional American family farms to a tiny sliver of corporate owned mega farms. In a kind of stealth mode, farmers were “taught” that modern farming informed by space age science could be very profitable. Agricutural colleges were at the forefront of the new science and praised introduction of chemical feritlixers and pesticides. The resulting high volume yields could be farmed with very expensive machinery. It was expensive but it was modern machinery with perks like air conditioning and fast processing speeds. Not to worry, the money for the purchases of all these chemicals and machines could be easily borrowed and the fat cat life would soon be in the palm of the farmers’ hands. 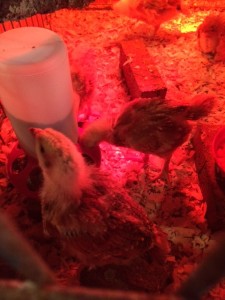 But Willie Nelson and John Mellencamp alerted us back in 1985 that American farmers weren’t making a living anymore…farmers were finding out that all those loans became a heavy burden. The market that promised to make them rich instead got flooded with crops and prices plummeted. No profits mean no money to pay back all those loans. The banks didn’t want to hear what happened to the market, they just wanted their money. So, many farmers lost farms that had sustained their families for generations. Despite the best funds raised by FarmAid, auctions for farms and equipment became common place and farm families were evicted from their farms.

Can you guess who swooped in and bought all those deeply discounted farms? Property developers who build Mcmansions? Sure, a few. But the bulk was purchased by corporations like Purdue and Tyson. Farming became food manufacturing. Instead of pockets of farms raising small numbers of animals based on what the land could support and the farm families could sustain. Food production rather than farming became the new normal. For example, here is some information from the United States Department of Agriculture’s Economic Research Service:

U.S. poultry meat production totals over 43 billion pounds annually: over four-fifths is broiler meat; most of the remainder is turkey meat; and a small fraction is other chicken meat. The total farm value of U.S. poultry production exceeds $20 billion. Broiler production accounts for the majority of this value, followed by eggs, turkey, and other chicken.

Broiler production is concentrated in a group of States stretching from Delaware, south along the Atlantic coast to Georgia, then westward through Alabama, Mississippi, and Arkansas.
Most U.S. broiler production is under contract with a broiler processor. The grower normally supplies the growout house with all the necessary heating, cooling, feeding, and watering systems. The grower also supplies the labor needed in growing the birds. The broiler processor supplies the chicks, feed, and veterinary medicines. The processor schedules transportation of the birds from the farm to the processing plant. In many cases, the processor also supplies the crews who place broilers into cages for transportation to the slaughter plant.

The U.S. turkey industry produces over one-quarter of a billion birds annually, with the live weight of each bird averaging over 25 pounds. Production of turkeys is somewhat more scattered geographically than broiler production.

The United States is by far the world’s largest turkey producer, followed by the European Union.

U.S. egg operations produce over 90 billion eggs annually. Over three-fourth of egg production is for human consumption (the table-egg market). The remainder of production is for the hatching market. These eggs are hatched to provide replacement birds for the egg-laying flocks and to produce broiler chicks for growout operations. The top five egg-producing States are Iowa, Ohio, Pennsylvania, Indiana, and Texas.

The large majority of the U.S. table-egg production is consumed domestically. U.S. egg and egg product exports are a relatively minor proportion of production. U.S. per capita consumption of eggs and egg products is around 250 eggs per person.

Did you catch that? 43 BILLION pounds of poultry. Also notice the language in the obove excerpt. Does it sound like the USDA is discussing sentient animals that breathe and have feelings and enjoy the sun on their feathers? No. The language refers to products. Units, not actual animals.

That staggeringly immense number of birds are not raised on a farm and they are not treated like animals. Food manufacturers, otherwise known as factory farms, raise chicken-like animals in sunless warehouses where they sit in their own excrement or in tiny cramped wire cages, eating and fattening up or laying eggs in an endless succession. Factory-farmed chicken-like animals don’t get to manifest their “chicken-ness,” to borrow a term from farmer/ food activist Joel Salatin. Factory chicken-like animals are not given the chance to act on the chicken behaviour impulses embedded in their chicken biology. They don’t get to scratch for tasty stuff outside like grubs or caterpillars or peck at vegetation to hunt aphids. They don’t get to select their own obscure egg laying spot or even get to choose which roost to claim for the evening. 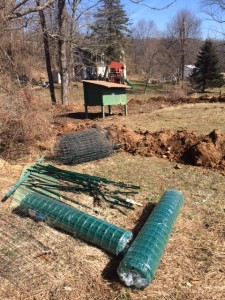 Making space for these distinctive chicken activities is the hallmark of a good chicken farmer. In my opinion, genuine farming includes, no – plans, the space for animals to be themselves. A good farmer helps chickens produce eggs and offspring or fattens them to be food in exchange for a steady food supply and thwarting predators and illness. But in this exchange, a good farmer RESPECTS his animals are alive and have feelings and sensations. A good farmer doesn’t try to just ignore this fact.

Factory farming subjugates an animal ONLY according to its use and with zero respect. Factory farms don’t recognize consciousness or sentience, only product and profit. Even the human workers in factory farms are de-humanized. They are expected to just distribute food, dose the antibiotics, and remove corpses from the same toxic climate the where the chickens live.

I’m drawn to raising chickens because I feel like my family and I are closer to the truth of eating. We can see how we are included in our “food chain”, not isolated from it and misled about the origins of our food. Most consumers have almost no awareness of HOW their eggs appear in a carton under flourescent lights in the refrigerated food warehouse. Or HOW the pre-butchered meat wrapped in plastic wrap gets there. This lack of awareness severs all of us intellectually from our animal-ness. The tragedy is we can pretend we aren’t predators. We are just shoppers. 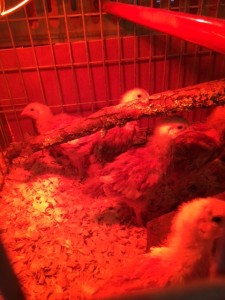 This is the crux of our Earth crisis. Consumers do not recognize the consequences of being a shopper. Consumers cannot comprehend their purhases are the end point of a chain of events that ravages nature at the total expense of the future. Advertising has brainwashed us into believing all animals are raised and nurtured on bucolic red barned farms. But food manufacturers are lying to you. Only a tiny fraction of the animals we eat are raised as animals. The majority of those 43 billion birds are birthed, fed and butchered in a cruel, mechanical over medicated feedlot or warehouse and most of us don’t even know it.

So I confess my urge to keep chickens is because I love the cluck and the scratch and the funny way they look up to swallow water and how freaking adorable the fluff muffin chicks are in the first couple weeks and the squee! I will get when we see our first eggs. But I DECIDED to raise chickens becasue pasturing chickens is one of the most subversive things you can do on a piece of land in 21st century United States. So in homage to Woody Guthrie, my bumper sticker is gonna say, “Our pastured chickens kill fascists.”

Care to find a middle ground between total dependency on convenience foods and and raising your own animals? Find a local farm that pastures their animals and buy from that farmer. I also offer you the EASIEST chicken breast recipe ever, if you have access to a crockpot:

Place 4 chicken breasts in your slow cooker, top with 2 cups of salsa. Cover and cook for 4-5 hours on low.
Top with cheddar cheese, cover and continue to cook for 1-2 hours more, or until the cheese is very melted and the chicken is tender and cooked through.
Top with cilantro and serve over rice.