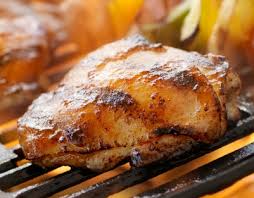 Nick is cooking tonight…and he’s making Cuban Mojo Chicken which is a marinade or sauce of only 5 ingredients: bitter orange, freshly ground cumin seeds, garlic, fresh oregano and olive oil. Having lived in Miami for most of his adult life, Nick loves Cuban food. According to LAist, there are quite a few Cuban restaurants in Echo Park, which we will need to check out.

Mojo originally appeared in The Canary Islands which are not far from Spain. As the frisky Spaniards started conquering The New World, we know they brought much of their language and food with them. This marinade which is fairly international, as the travelers dropped anchor at every island, can be made with any combination of acid/ oil such as red peppers (roasted and ground), green peppers (roasted and ground), cilantro, onions, and on and on. 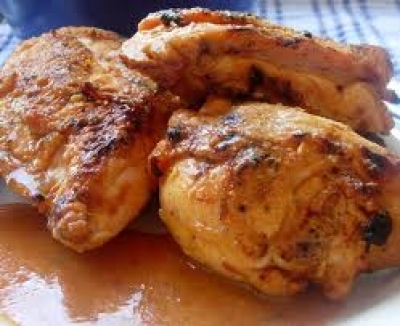 In Cuban cooking, mojo typically applies to any sauce that is made with garlic, olive oil, and a citrus, in this case, bitter orange. Home cooks will notice in Cuban recipes that mojo is frequently used to flavor the yucca and is also used to marinate roast pork.  Cubans supposedly refer to the sauce as ‘mojito’ – not to be confused with the mint, rum and cachaça drink — and used for dipping fried plantain chips and yucca.  (I don’t know that for sure because the closest Cuban I have to is Nick. And he’s half Ecuadorean, not from Cuba but only lived in Miami where there is massive Cuban community. HA!)

If finding bitter (Seville) oranges is difficult – but not impossible — you might find it easier to add a couple of tablespoons of freshly squeezed lime and lemon to the fresh orange juice which is what Nick does.

(Incidentally, consumers can find this bottled and made with cornstarch. Don’t buy it. Make it. It’s so much better.)

1 full teaspoon toasted and freshly ground cumin seeds (Easy to find in your local market and will make a HUGE difference in the outcome with a wonderful smoky flavor.)

(With salt and freshly ground black pepper to taste)

Mash the garlic in a mortar and pestle or smash it into a paste which the flat side of a knife. Toast the cumin seeds in a skillet until fragrant. Grind.

Place everything into a bowl and stir well. Marinate any meat (chicken, pork or beef) for in the fridge for 12 to 24 hours. Grill, roast or broil according to your taste. It’s a taste of the islands…and drink lots of mojitos.