I was a very naïve eater before I moved to New York. (Actually, I was just naïve but that’s a different matter…and I still can be.) As I’ve said before, my mother with whom I spent most of my upbringing, just wasn’t a cook. From her, it was “here’s the Kraft Macaroni” or being handed the can-opener to expose aluminum-clad franks and beans.

When I moved to New York City, I had the great opportunity of waiting tables and a whole new world opened up to me. It wasn’t just about food, it was about living. I wasn’t more than 21 years old, finished school and was working at a Cajun/Creole restaurant in Tribeca called How’s Bayou, (meaning “how are you”from New Orleans creole). It was an open air restaurant with sliding French doors on its two sides which allowed cool Hudson River air in the summer.

Then, I remember thinking the blackened catfish and Cajun fried chicken, served with collard greens flecked with bacon, mashed potatoes with skins left on, a flaky buttermilk biscuit and honeyed sweet potato were the best things. And to drink, which we drank while working, we served up strong, frozen margaritas or Hurricanes topped with 151 proof rum. It was one helluva a place to work and I loved it.

I met some a few of the most important people in my life during this time such as Penny. Penny is a loveable art historian on paper, a self-taught gourmand and to me, a national treasure. We worked together during the day shifts and sometimes, nights. She was a career waitress (when the term didn’t imply anything) and hated the food at Hows Bayou.  Hated it. She often complained that what we served was almost inedible by boasting about her annual European as proof she knew what was good. Not only did I envy her for her worldliness, but besides the cooks where I worked and my father’s family cuisine (Filipino), she was and is my greatest cooking inspiration.

I always told Penny that she resembled the silent screen movie-star Louise Brooks with her jet black, bobbed hair and bangs. She loves to talk about food as much as she loves to cook it. When Penny finds a food delicious or she crinkles her nose and face up, exclaiming, “This is so yummy!”

Funny thing, even though was in her early forties, she never been to a gay bar so she proposed that she cook dinner one evening and we could go to a happy hour. Her and Tim, her husband, lived in the West Village, close to The Monster, one of New York City’s landmark watering holes, on the corner of Sheridan Square and Christopher Street. It not only had a piano …and a player…but a disco in the basement. (Talk about an identity crisis: In one corner, queens were croaking out Broadway show tunes; in another, some were slinging back gin and tonics at 2-4-1s and downstairs, vogue contests were performed.) We shouted at each other above the antics and got drunk. The two for ones really should be called 12 for 6 because that’s what we wound up drinking…each. We started at 4 o’clock and left at around 8. With four hours of drinking, Penny still had to make dinner. 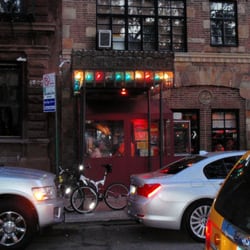 With our liquor soaked steps, we walked the two blocks to her apartment at Bleecker and Grove. Once inside her pillbox-sized studio, lined with history books instead of wallpaper, I opened the first bottle of wine. She put the swordfish steaks in the oven rubbed with olive oil, salt and pepper. We chatted.  Tim at the time wasn’t home from teaching at Queen’s College and he was to join us so we chatted and drank so more while waiting.  She made the cilantro pesto. We continued chatting and drank some more. I opened the second bottle of wine. We starting slurrying our chat.  Tim came home. Introductions were made and by this point, it was just slurring. Huge lovers of opera, we listened to a recording of La Traviata, featuring soprano Angela Gheorghiu as Violetta so that we could listen over the third bottle of vino.

“Oh my God!” Penny exclaimed in an anguished fury. “The swordfish!!!” The wine-soaked chatting had gotten the better of us. Our dinner was ruined.

But as luck and Penny’s cooking prowess will attest, it was not. On floral plates with lacy golden edges, beautiful browned slabs of Broiled Swordfish, smeared with Cilantro Pesto was served and a friendship was born. 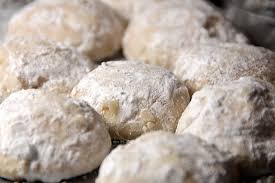 Making holiday cookies is really not that complicated to understand or do. It might seem difficult because there might be a food processor or a stove but making cookies, a small nugget of sugary goodness, is so simple. So divinely simple…and fun. Simply simple.

I’ve been invited annually to a cookie exchange party for the past three years. The party, now in its fourth year, was the first time that I was able to go. To make up for the past three years, I made three different kinds of cookies because I couldn’t figure out which to bring. (Ultimately, I only brought two.)  I discovered one of the recipes from Real Simple Magazine which has quickly become one of my favorite publications when it comes to food. (I could do without the makeup tips though.)

The magazine recipe for Cornmeal, Fig and Thyme was delicious but the Mexican Wedding Cookies is truly one of my favorite for the holidays and everyday. Apparently it has many names around the globe such as Russian Tea Cakes, Italian Wedding Cakes, “biscochitos”  (Mexico), “polvornes” in Spain, Swedish teacakes (to be confused with the Russian), Moldy Mice, Pecan Sandies, Danish Almond Cookies, Finnish Butter Strips, Napoleon Hats, Melting Moments, Butter balls and…the hipster version, “Yeti Balls”. (Oh, the Iceman cometh…). All are made with the same method (flour, sugar, vanilla and butter) but with different shapes such as crescent, balls or strips…sometimes they use different nuts such as hazelnuts (filberts) or pecans in different European areas. 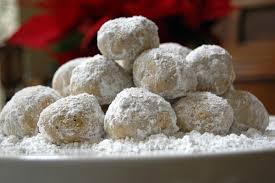 You can research why it’s called the Mexican Wedding Cookie/Cake, Russian Doll Goes to Mall…whatever, but I’m calling it the “Auntie Mame”. Not only is it sugary and sweet like the Lucille Ball musical version (“We Need A Little Christmas“) of Mame, but it’s well-traveled and glamourous as if Rosalind Russell dusted it with white. It’s also smart, sort of like the casting of Angela Lansbury in the Broadway musical.

1 cup very finely chopped toasted nuts (Note: Toast nuts at a low temp of 325 for about 20 minutes or until fragrant on a cookie sheet. Then place in a food processor to a mince.)

2. Combine the butter, 3/4 cup powdered sugar, salt and vanilla in the bowl of an electric mixer and beat until creamy. Beat in the flour and nuts. Chill the dough 30 to 60 minutes.

3. Shape the dough into balls about 1 inch in diameter and try to make them them the same size. You want them to cook evenly.  Arrange them on parchment paper, squishing them down to flatten the bottoms so they don’t roll around, about an inch apart. Bake on the center rack of the oven until the cookies are set and seem to be a  golden. Roughly 18 to 20 minutes, rotating the baking sheets halfway through cooking

4. Transfer the cookies to a rack or a plate. Then using the sifter, immediately dust heavily with about a cup of the powdered sugar. Once they cool, place the remaining confectioners sugar into a bowl and roll the suckers coating them entirely. Sometimes, before serving, I like to sift some sugar on top to make it look pretty.

I stopped cooking Thanksgiving meals about 5 years ago. I know, I know. It’s one of the big days that all caliber of cooks want to shine showcasing their adeptness in the kitchen, commercial or home. If you know anything about me, cooking is one my favorite of the things. Therefore, you would think that I would be all over this but I’m not. Not anymore. I stopped cooking for the holiday when I was ending a decade plus relationship that entailed my work and my personal life. I also moved from San Francisco, where I lived for 3 years, back to Los Angeles at the same time. (Hey, no one ever said that I liked to do it easy). That first Thanksgiving, as a single man, turned out to be a horrible experience as I was invited to eat at one of my ex’s friend with their 30 plus dinner guests. My only excuse for going was I that I was still delirious from the break-up.

With each progressive year, I feel less and less like big festivities. This year, I think it’s just Nick, Holly, JJ and my mother. I don’t really think of the holiday as exceptional anymore but I celebrate it quietly with people who love me and I, them.

At the heart of it all, Thanksgiving, Christmas, my birthday and New Year’s Eve clustered together in a 6 week period, is that I really just want to spend quality time with the people whom I cherish. I don’t want to wrapped up in a kitchen anymore for the entire day. Let someone else shine and enjoy learning about cooking. (To brine or not to brine? Fried or not to fry? Oysters in the stuffing or sausage?) I’ve made a lot of turkeys, roasts and hams in my life and I’m now willing to give up the “big star” turn to others. Cooking quietly, simple easy meals on a daily basis.

Roasted Turkey Stuffed with Prunes: Mario Batali’s way of cooking a large bird is ingenious. Have your butcher remove the bones and use them for stock and gravy. Beautiful. Easy. Delicious and quick.

Homemade Bread: There is nothing in the world like homemade bread. Nothing. It can be made two or three days in advance and frozen. Just one of the most beautiful things ever. No Knead Bread is revelatory.

Salad: If I were making the dinner, the recipe for this Kale, Fennel and Apple Salad would be it. And I would leave it at this. It feels very European this meal. A protein. Bread. Salad. Soup.

This would be the meal. You don’t have to do too many things. If you want to throw in a traditional dish of roasted potatoes or sweet potatoes, go for it.

Oh, but don’t forget for dessert. HA! I don’t make a lot sweet things and there are reasons for it. I don’t want it around because I will eat it…ALL…but if I find something sweet and light.

White Wine: Duckhorn or Cade Sauvignon Blanc, Napa Valley. Both are perfect wines for cocktails and for the first course. Lovely and herbaceous.