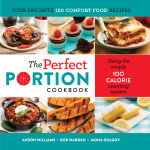 What do stars of iconic television shows  —  such as Anson Williams from Happy Days — do after their show goes off the air? Do they continue to act like The Mysteries of Laura Debra Messing, leaving lovable Grace Adler of  Will & Grace behind? Or do they create entire behind-the-cameras careers, such as Laverne & Shirley’s Penny Marshall, who went on to much acclaim directing Tom Hanks in Big and Madonna in A League of Their Own? How about the Olsen Twins from Full House – Mary-Kate and Ashley — creating a billion-dollar fashion business? Williams, who played the adorable Potsie from Happy Days, turned out to be all those things and more. He’s directed many television shows, including episodes of the fabulous Melrose Place and The Secret Lives of An American Teenager. But he also became an incredibly successful entrepreneur with Joanna Connell, a Hollywood make-up artist. For the past 18 years, Connell and Williams have created a mini-empire with StarMaker Products, a skin line used by a variety of television actors.

After a trip to his local store, there was a lightbulb moment when the actor-director-entrepreneur saw the 100 calorie snack packs. Williams said, “I realized it was all about portion control. I can eat all the foods I love, but I need to keep it at 100 calories.” Williams approached QVC’s Bob Warden and nutritionist Mona Dolgov to help him create The Perfect Portion Cookbook. Over a two-year period, testing and re-testing, writing and re-writing, tasting and re-tasting, Williams – along with his team of Warden and Dolgov – developed his vision, starting off with this debut cookbook. Eventually, Williams will turn the perfect portion into a library of cookbooks and healthy products.

Fundamentally, all the recipes in the book are divisible by 100 calories, creating the perfect portion. Each recipe has a graph, calorie count, and how much is in that portion. For example, follow the instructions for the Pumpkin Pie cookie and once made, each sweet is 100 calories. Simply, it’s not so much a diet, which is restrictive, as it is a change in eating habits. Nothing is taken away, as much as everything is counted.

What is your favorite food to cook at home? Gosh. Definitely Saturday and Sunday morning breakfast with my kids. I love getting together and making French toast as a family.

What do you always have in your fridge at home? It’s what stays in the fridge when you have four kids. We are always adding to it. Always greens. Quick proteins. Healthy drinks. Mostly stuff for the kids.

What marked characteristic do you love in a person with whom you are sharing a meal? Connection with that person.

What marked characteristic do you find unappealing in a person with whom you are sharing a meal? Self-involvement.

Your favorite cookbook author? Bob and Mona. We put the cookbook together. Giada de Laurentis is good, too.

Favorite types of cuisine to cook? I’m not an expert cook, but I do love family recipes. Food that has meaning. My wife Jackie, who is Swedish, cooks family recipes handed down to her.

Beef, chicken, pork or tofu? Chicken and tofu. But all of them in moderation are good.

Chef you most admire? Hope Berk. She is our eighty-four-year-old next door neighbor and has made all the kids their birthday cakes for years. She’s been a huge influence on our family. Making food for us that has been generational.

Food you like the most to eat? Bob’s Pot Pie from our cookbook. Best thing I’ve ever eaten.

Food you dislike the most? I despise fast food. I think the companies are corrupt and greedy. They created an addiction.

What is your favorite non-food thing to do? Before the kids, I sailed planes. Now, I love being with my kids and spending time with them. I love creating. Writing scripts. I do more now than ever.

Who do you most admire in food? Bob and Mona.

Where is your favorite place to eat? Home.

What is your favorite restaurant? Café Escobar in Malibu. All the food is made from family recipes and is really delicious. Inexpensive. No pretense. I can sit at the bar, have a great meal and a glass of red wine.

Do you have any tattoos? And if so, how many are of food? No tattoos. 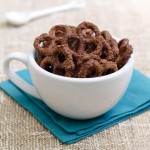 Preheat the oven to 275 degrees. Line a rimmed baking sheet with parchment paper. In a mixing bowl, mix the egg white and vanilla. Toss in the pretzels and coat well.

In a smaller bowl, combine the sugar and cocoa. Taking 2/3 of the sugared cocoa mixture, toss with the pretzels.

Spread evenly on the baking sheet. Sprinkle with the remaining sugared cocoa. Bake for 20 minutes, turning the pretzels over after the first 10 minutes. Cool slightly before serving.