Have you seen the new cookbook, Forking Good: An Unofficial Cookbook for Fans of The Good Place by Valya Dudycz Lupescu and Stephen H. Segal? Like the show, Forking Good combines food humor with moral philosophy for a delightfully unexpected cooking experience.

Valya Dudycz Lupescu and Stephen H. Segal are the coauthors of Geek Parenting and the cofounders of the Wyrd Words storytelling laboratory. They live in Chicago in an Art Deco building that dates to the days of pulp magazines and Prohibition. Their weird family enjoys fan conventions, well-considered color palettes, and lots of music. 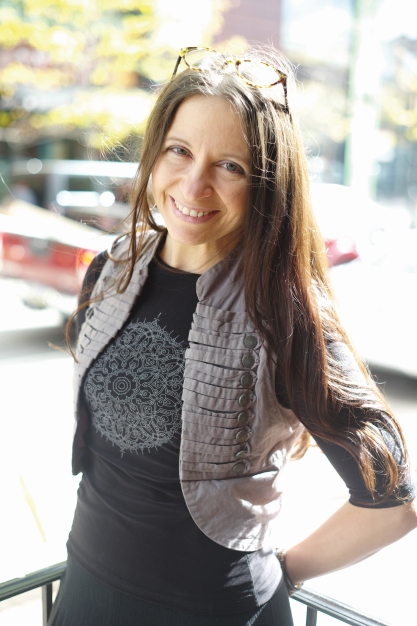 Valya is the author of the novel The Silence of Trees. She earned her MFA in Writing from the School of the Art Institute of Chicago. Her poetry and prose have appeared in The Year’s Best Dark Fantasy & Horror 2019, Kenyon Review, Culture, Gargoyle Magazine, Strange Horizons, and Chicago Reader. 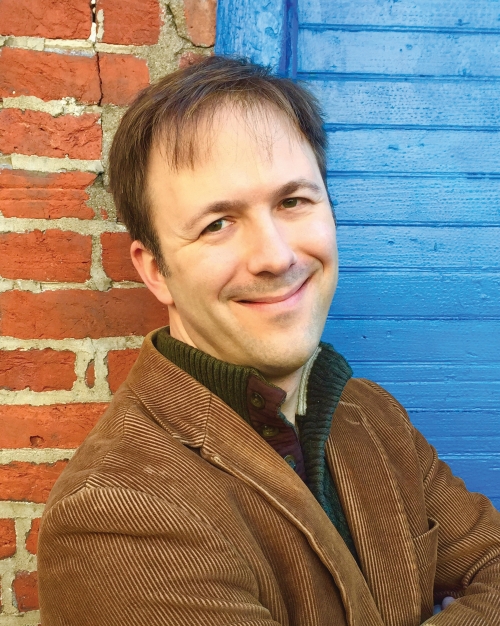 Stephen is a journalist who has covered artists, scientists, musicians, and makers for Philadelphia Weekly and WQED Pittsburgh. As the chief editor at Legacy.com and, formerly, Weird Tales magazine, he has encouraged writers of both fiction and nonfiction to dig deep for unexpected truths. He grew up at the Jersey Shore.

~What is your favorite food to cook?

Valya: Vegetables—the variety, color, texture, and taste of them in different combinations depending on the season and my mood. I find them so satisfying to all the senses, especially roasted/sautéed and well-seasoned! I tend to go on kicks for a few months, exploring the different things one can do with them. For a while it was brussels sprouts, then asparagus, then red cabbage, and it’s been cauliflower since the summer. Oven-roasted cauliflower with different types of spices is one of our current family favorites.

~What do you always have in your fridge at home?

Stephen: More than actually fits! Two kinds of milk and three mustards and four salad dressings and five raw vegetables and six juice boxes and honestly more maple syrups than you would think anyone would have….

~What do you cook at home?

Valya: We make a lot of curries, stir fries, and pasta. Each of those has so much room for creative improvisation (and spices!)

~What marked characteristic do you love in a person with whom you are sharing a meal?

Valya: Curiosity. I enjoy sharing a meal with someone who is curious, from their openness to savor new flavor experiences to their willingness to answer and ask provocative questions in conversation.

~What marked characteristic do you find unappealing in a person with whom you are sharing a meal?

Stephen: At meals, I’m happy either to chat or eat together quietly — but if we’re talking at the table, one thing that always riles me up is when someone asks me questions and then keeps interrupting me before I can finish answering. Hey, if you’re gonna ask, listen!

Valya: Pyrex, hands down. I prefer the non-porous surface of glass for storing food and for dishwasher cleaning.

Stephen: Cocktail — something complicated yet cohesive, a layered flavor profile that goes on expanding from the scent right on through the aftertaste.

Valya: I have many cookbooks that I love, but one of my favorite cookbook authors is a dear friend and fellow writer, Mary Anne Mohanraj. Mary Anne is a fantastic cook and writer who has been sharing her recipes on Patreon for years. Her most recent cookbook, A Feasts of Serendib: Recipes from Sri Lanka, is available on her website: http://serendibkitchen.com

Stephen: Three-way tie: the Vitamix (it has ten speeds!), the apple corer (it’s so geometric!), and the pizza cutter (it rolls so satisfyingly!)

Valya: My Wüsthof paring knife and my cast iron skillet.

Stephen: Soft cheese. Chevre, mascarpone, soft manchego, whatever. It has a happy place in breakfasts, lunches, snacks, dinners, and desserts.

Valya: Cilantro. I’m one of those “cilantro tastes like soap” people.

~Least favorite thing to do in a kitchen?

Stephen: The third load of dishes in the same day.

~Favorite types of cuisine to cook?

Valya: I love to cook Ukrainian cuisine. I don’t do it often, usually on holidays and special occasions, but the hearty, comfort foods like pierogis (which are called varenyky in Ukrainian), borsch, Ukrainian breads and cakes, all connect me with my heritage and my ancestors.

Valya: Onions. I use onions in most of my dishes, especially caramelized. It’s such a perfect flavor, alone or layered with other flavors.

~Chef you most admire?

Valya: The chef that had the greatest impact on me growing up was Julia Child. I loved watching her cook on PBS; there was so much joy in it. Hers was the kind of passion I try to apply to all my meals. I also deeply admire Grant Achatz for his incredible perseverance and his fearless creativity. Eating at Alinea was an unforgettable and inspirational experience.

Stephen: At a meal: Indian cuisine — it’s such a perfectly satisfying blend of sweet, salty, savory, and spicy. As a snack: frozen dark chocolate-covered banana slices.

~What is your favorite non-food thing to do?

Valya: Our apartment is full of books. We are definitely a family of readers and music-lovers.

~Who do you most admire in food?

Valya: Melissa Clark. A dear friend and fellow foodie turned me onto Melissa’s videos, and I did a deep dive into her work. I love the way she writes about food, it’s such a pleasure watching her cook, and her “Weeknight Kitchen” podcast is one of my favorite things to listen to on my way home from work.

~Where is your favorite place to eat?

Valya: Honestly, I love to eat at home—ours and other peoples. I appreciate the intimacy and personality. Outside of home dining, we really love our neighborhood Ethiopian restaurant, Ras Dashen. Also high on our list is Band of Bohemia, such wonderful food and cocktails. w

Stephen: As an East Coaster relocated to Chicago, I thank the heavens for Jimmy’s Pizza Cafe, which is the place to get real New York pizza in town.

~How many tattoos? And if so, how many are of food?

Stephen: None.
Valya: Two. None of food, though.
Stephen: Yet.

Excerpted from Forking Good: An Unofficial Cookbook for Fans of The Good Place by Valya Dudycz Lupescu and Stephen H. Segal. Reprinted with permission from Quirk Books.

“In this realm, IHOP stands for Interdimensional Hole of Pancakes. You don’t really eat these pancakes. It’s more like they eat you.”—Michael, Season 2, Episode 10, “Rhonda, Diana, Jake, and Trent”

When Chidi agrees to teach Eleanor about ethics, he turns to Immanuel Kant’s The Groundwork of the Metaphysics of Morals. In it, Kant creates a basis for defining what behaviors are ethically acceptable (and, further, what behaviors are ethically required). Kant believed that ethical action was guided by the so-called categorical imperative of rules that produce ethical behavior if they are followed. It was his opinion that immorality is the result of a person holding others to a different standard of behavior than they do for themselves.

In Season 2, Episode 10, Chidi struggles against the obvious need to lie to maintain the Soul Squad’s aliases when they find themselves in the Bad Place. He tells Eleanor that according to Kant, lying is always wrong. He tells her, “Principles aren’t principles when you pick and choose when you’re gonna follow them!” Eleanor declares herself a moral particularist, invoking the philosopher Jonathan Dancy to make the argument that, “You have to choose your actions based on the particular situation.” Eleanor wins that round, and the conflicted Chidi tries to blend in.

The limitations of Kant’s categorical imperative don’t seem to apply in the absurdity of the afterlife. Kant may have argued that the contradiction of standards was immoral, but what happens when you have a completely different set of rules to follow, because you’re literally in hell? Or when you find yourself at . . .

THE INTERDIMENSIONAL HOLE OF PANCAKES
In Season 3, the Soul Squad arrives in the Neutral Zone between Good and Bad, at the Interdimensional Hole of Pancakes—the crossroads of all dimensions, where the pancakes contain interdimensional portals and want to eat you as much as you want to eat them. The Judge augments reality to make this place appear as a regular IHOP, but dangers still exist. As Michael warns the humans, “If you eat anything in this IHOP, you will literally explode.” Chidi missteps and falls into a portal, shrinks, and tumbles through time and space. Before he’s retrieved, he gets a glimpse of the Time Knife, which he describes as “a trillion different realities folding onto each other like thin sheets of metal, forming a single blade.”
For the indecisive deontological philosopher who spent his life in perpetual conflict for being unable to make the simplest of decisions, what does it mean to see so many dimensional possibilities at once? We’re not sure; he seems to snap back into their dimension fairly easily. Fortunately, the glimpse of the fractalesque reality did not launch him into the existential crisis that Jeremy Bearimy did.

So how does this influence our pancake recipe?

Some version of it has been part of the human diet for thousands of years, so it’s fitting that the crossroads of all dimensions is a symbolic house of pancakes. The earliest written reference to a pancake is the tagenia from ancient Greece, mentioned in the writing of the fifth century B.C.E. poets Cratinus and Magnes, and made with flour, olive oil, honey, and milk.

There are versions of pan cakes all over the world: Ethiopian injera and Indonesian serabi, French crêpes and German Pfannkuchen, Chinese bing and Indian cheela— some sweet, some savory, all grain based. In America, the earliest pancakes were likely made with cornmeal or buckwheat and called flapjacks or johnnycakes. Buttermilk pancakes, which are perhaps the most popular iteration in the United States, are believed to have come from Scotland, where they are called drop scones and made with a leavening agent that produces a taller cake than the typical crêpe-like British pancake.

Our vegan version drops the buttermilk and eggs but still captures the delicious fluff and flavor. And they won’t try to eat you.

• Preheat the oven to 200 degrees Fahrenheit. Line a baking sheet with parchment paper. Set aside.
• In a small bowl, combine flour, baking powder, and salt. In a large bowl, combine melted coconut oil, milk, and syrup.
• Add dry ingredients to the wet, stirring until just incorporated. Don’t overbeat the batter or the pancakes will be tough.
• Allow batter to sit for 5 minutes while you heat a griddle or a cast-iron skillet on medium-low heat. The pan is ready when a drop of water sizzles upon contact.
• Lightly grease the griddle with vegetable oil or coconut oil.
• Using a large spoon, ladle small portions, about a heaping tablespoon, of batter onto the griddle. (You want the pancakes to be bite-sized.)
• When bubbles form in the batter, use a spatula to flip pancake and cook for another minute or two. Transfer cooked pancakes to the prepared baking sheet and warm in the oven while you cook the remaining batter.
• Sprinkle with powdered sugar and top with the fruit of your choice.