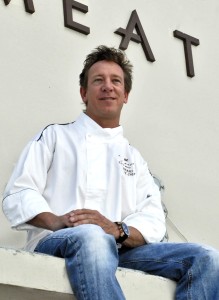 There is something about South Beach Meat Market’s Chef Sean Brasel which reminds one of a Western movie actor.  His laconic descriptions about living in Colorado, tinged with the Midwest accent, bring to mind Clint Eastwood or John Wayne, a man of few words who allows his actions to speak, rather than blathering like a salesman (or a publicist). It’s the economy in his tone that displays his attention to detail. As a restaurant guest, you can envision him at his stainless steel eight-burner stove, seasoning his steaks according to the cut, a cowboy lassoing a cow before heading to the bull.

Sixteen years ago – on April 1, to be exact – Brasel moved to South Beach from Colorado, where his parents still live. He and his business partner, David Tornek, created Touch, a high-end concept restaurant complete with entertainment and glorious food. Brasel says, “It was perfect for the time. Food meeting nightclub. We – my business partner and I — needed to re-focus, and the question became ‘what do I want to eat?’” Hence, he created the aptly named Meat Market with three locations: South Beach, Puerto Rico, and Palm Beach. (Although, Brasel mentions another is on the way to Tampa.)

It’s a luxury steakhouse, but the appeal lies not in just serving steak but the three-tiered menu as well as a special daily cut. There is a Meat Market’s Signature: New York, Rib Eye, Filet, and the sirloin which Brasel calls pichana, referring to the cut and its Brazilian name. (It differs from an American sirloin because the fat cap is left on, giving the beef more flavor.  Smart.) His House Creations allows Chef Brasel to produce inventive marinades and sauces with the meat, including a steak sampler. (When did you go to a steakhouse and get a sampler plate with wagyu, a filet, and a NY strip? Seriously? When?) The last of the trio is the Reserved Cuts, which feature big and rich portions of Niman Ranch Prime Short Rib or thirty ounces of an Australian Tomahawk Ribeye. There are other goodies on the menu, but Brasel built a steak house, so you eat steak. Clearly, you aren’t a vegan.

Chef Questionnaire, with a nod to Proust:

What is your favorite food to cook? That all depends on the location of what and where I am cooking. If I am at work, I enjoy working on future dishes and playing with different concepts and ingredients.

If I’m spending a beautiful Sunday afternoon with friends cooking on a grill, then I will probably start planning five days before, marinating meats, sous vide, etc.

I also crave those smoky flavors that only a grill can give. I even go so far in my grill dreaming to pair different items with the type of grill I get to use; whether it’s a charcoal, wood or even a gas grill. Each one has its own characteristics that lend itself to specific flavor profiles.

And lastly if I am at home, I like making pasta. I don’t get much of an opportunity to cook it at the restaurant, so I take advantage on those rare days off. I also like to eat vegetarian-ish at home – making gnocchi the classic way right on the counter with no electric equipment, like they did in Italy years ago. For that same reason, I don’t own an electric mixer.

What do you always have in your fridge at home? Almond Milk, cold brew, fresh blueberries, Sriracha, and of course, lots of red wine.

What do you cook at home? See above

What marked characteristic do you love in a customer? The characteristics I love in customers are people that are not close-minded and are willing to be exposed to new carnivorous cuts. We have a lot of customers who specifically want the petit filet. Nothing against it, but that’s the vanilla ice cream of meat. I love it when a customer says, “Send me a cut I have never tried before,” and we can introduce them to something new. We have buffalo, wagyu and dry-aged Prime Certified Angus – all of which have more flavor than a normal filet, in my opinion.

What marked characteristic do you find unappealing in a customer? When you have customers who come into the restaurant and are already in a bad mood – it’s an uphill battle from the start. They come in already with a negative attitude and it’s hard to change that around. We can bend over backwards and offer them anything, but they won’t let us make them happy because they came in with that mindset.

Tupperware, Rubbermaid, or Pyrex? Can I choose Cambro? That’s what we use in the kitchen. But at home, I love Pyrex because it doesn’t hold any flavors.

Beer, wine, or cocktail? Anyone who knows me knows that I have a passion for red wine, whether it’s cooking with it, drinking it, or pairing it.

Your favorite cookbook author? I can’t say a certain cookbook author, but I can say that I collect books. I really enjoy reading all the chefs’ little stories about how a dish inspired them or the childhood memories they speak of in a recipe. Having said that, my favorite read still has to be Kitchen Confidential by Anthony Bourdain. Although it is not a cookbook, it is just so well-written and his perception and his ability to transcribe that into words had me laughing hysterically. He is an amazing author.

Your favorite kitchen tool? I use the micro plane tool religiously. From truffle to macadamia nuts to orange and lemon zest, it is the ideal tool to put that “je ne sais quoi” into your dish.

Your favorite ingredient? I know it sounds cliché but truffle oil. It has such an indescribable quality, giving dishes a light umami twist. Sometimes I’ll put it in some dishes and most people can’t even catch it. It just adds that little twist of complexity.

Your least favorite ingredient? Chicken. Ironically enough, I like to eat it but I feel like when I spend time cooking it, no matter what you dream up in the kitchen, at the end of the day, it’s still just chicken. I’ve done some special chicken dishes at Meat Market – with poulet rouge or corn-fed baby chicken – but it seems like customers are very hard to please when it comes to chicken. I think just plain old fried chicken done right is the best.

Least favorite thing to do in a kitchen? This is a tricky answer because I like cooking and cleaning. I love creating and I crave the adrenaline rush from working the line even when it’s hot and slammed. I guess I have to say I don’t like having to tell the cooks the same thing all the time. As chefs, we all get tired of saying the same sh*# all the time. It can ruin my night if I keep telling them the same instructions I told them last night and last week. I guess that’s why chefs throw pot and plates! (Smiles).

Favorite types of cuisine to cook? Living in Miami where it is such a melting pot of cultures, I really can’t limit myself to one type of cuisine. If I had to choose, I would say American with roots stemming from Latin America and the BBQ flavors of the Deep South. At Meat Market, I try to incorporate a lot of these different flavors and techniques into the menu.

Beef, chicken, pork or tofu? Beef without a hesitation. Most people just think beef and steak, but beef is one of the most versatile ingredients in the kitchen. From charcuterie to marmalades to brines, cures, smokes, and of course, braises and roasts – there is a lot of creativity to be had with beef.

Favorite vegetable? I feel bad limiting myself to just one, but I have to say I had a deep admiration for pumpkin. There is so much you can do with it. I puree it, fluid-gel it, ferment it, pickle it, or just plain roast it. I can use it in so many different ways that it’s become a staple in my kitchen.

Chef you most admire? I have to say Chef Grant Achatz. I had the opportunity to visit Chicago and experience his 22-course menu at Alinea four years ago. His thought process is beyond imagination, and recently I went to his Alinea pop-up in Miami, and again, it was such an unbelievable experience. Who can imagine ever making a helium balloon out of green apple? He is the modern day Beethoven of food – beyond words.

METHOD:  Using the seasoning, coat the lamb ribs and place in a pan for 4-6 hours in fridge.  Then, add a small amount of water to the pan, cover with foil and let cook at 275° for 3-4 hours depending on the thickness of the ribs.  Take ribs out of the pan and place on a sheet tray to cool.  Once the ribs are cold, section them into individual chops.

METHOD:  Place all ingredients into a blender and mix well.

METHOD:  Bring all the ingredients, EXCEPT the papaya, to boil.  Let the liquid cool and then pour over the julienned papaya.  Cover and refrigerate.

METHOD:  Julienne onions and put to the side.  Put other ingredients in a pot and bring to a boil.  Pour liquid over the onions and let rest.

METHOD:  Toss all the ingredients together until mixed.

TO FINISH/PLATE:  Place lamb ribs, a few at one time, into a hot fryer and cook until crispy.  Toss them in BBQ sauce and place them on a handful of the slaw; garnished with some chopped peanuts.